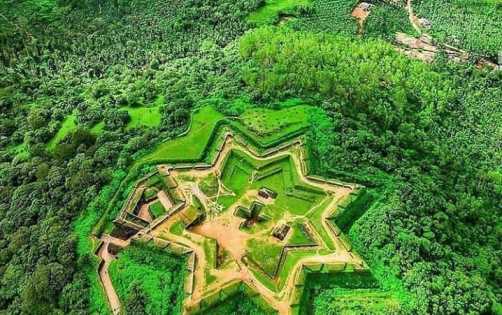 At night soldiers on the top in the back environment with blurry eyes because of the mist, the enemies army in the front waiting to for the raise of the Sun to attack them. There were the things that we imagine as soon as we think of a historical fort. This fort is named as Manjarabad by the king but the present generation calls it as the Star fort of Sakaleshpura. This jewel of India took its birth in 1792, this is one of the finest examples for the Islamic architecture in India. This placed is already being explained by its name Manjarabad which means a fort covered with mist. For the first time When to the tiger of myruru Tippu Sultan saw this place it was crowded with mist all around, Manju in Kannada means mist hence it was named so. This architecture has a tinge of French innovation too ass Tippu was in mutual attachment with the French Government. We have been so advanced at present with learning at our nearest but even though in olden days there were fewer development people had the best of the brains to give such architectural pieces. This fort is not meant for the pleasure of the king and this kinglet but this was specially customised for the military purpose. Let's swing around this shell shocking place.

The tiger of Mysuru was the one to initiate this plan of building a for at Sakaleshpur. He built the highway from Banglore to Mangalore with the help of French authority, so we can see the shade of europian touch to this pathway. This place had been under the rule of many south Indian rulers, Palegaras has this as their capital later it was taken over by Shivappa Nayaka of Ikkeri but none of them used it so intelligently. Later as Tippu Sultan has his hands on this place he built this fort as per the structure of one of the British forts. Yes, it's shocking but Tippu Sultan got the inspiration of building this fort from the Fort William at Calcutta. “If you are the police and you need to find the thief then think like a thief”, he followed this strategy to get rid of the Britishers. The main advantage of this place was that the enemy in front of this for fort can’t figure a proper spot to attack due to the mist. Betwixt the coffee plantation and the spice gardening,g this place is also known for the delicacy of its beauty. Due to this feature, the Britishers called Sakaleshpur as the “ Poor Man’s Ooty”. There was a highway that was built between Coorg and Mangalore which too had the touch of europian style which was constructed on the recommendation of Tippu Sultan. Tippu Sultan never got his family to this fort as he wanted to keep this purely for the purpose of the army and wanted to keep his family our of risk. So let me tell you how you people can reach here, it's not so easy but you need to have many dancing rides here.

This fort has many hidden books which have to be opened. Definitely just by seeing we may not understand the importance so easily. Here we go exploring the unknown. This is in the shape of an 8 pointed star. The engineers who have built it have seen the future of the fort before construction. The external walls have been built with stones like limestone, granite so that it can withhold the showering on nature and the enemies. The interiors are also too strongly built with the army. The fort is at a height of 3400 feet. Rainwater harvesting was being in practised from that day, we have a big well in the shape of a plus to store the water during rains. This is the only fort based on multiple layers. There are many hidden tunnels down the star shape to store gun powder and ammunition. There is one tunnel which leads a direct way to Srirangapattana fort, but it is now closed as there is very low oxygen supply in this lane. There are stories that Tippu used to go to and fro to his home via this route. Up the start point structure, there are few small tombs for the soldiers to have their rifles during the war.

We have many views of exciting here, up the fort we can view the full overview of the fort, as we are at the height of 3200 feet we can view the Arabian sea. This place is to be best viewed before the first shower of monsoon or during winters to have the feels of the mist.  There are many other places that can be visited here the divine environment of Sakaleshwara temple and Byraveshvara temple, splashes of water at Abbey falls and Magajahali waterfalls. There was a tragic end to the people at this fort, the Britishers killed the soldiers of Tippu Sultan and filled the well with their dead bodies. Even though there was a tragic end the ancestors of our land have to lead the culture, tradition of our land to glories. It's our pleasure to be existing and visiting just the glory of the people who have made this land an auspicious one. Do place get blessed by visiting this wonderful place.

The Astagiri waterfalls is a beautifull and serene cascade located amidst the forests. Less tourists and relatively a small crowd is found here making the waterfall almost private. A natural pool is made up by the rocks where the tourists can play around.